Clarivate is the name the new private equity owners (Onex and Baring Asia) gave to the assets previously owned by Thomson Reuters when they acquired them in 2016 (but management had already decided to sell it by 2015). In our view, Thomson Reuters decided to sell the business for two reasons: it was small, relative to its portfolio at the time (Exhibit 5), and it was not providing the same reliable mid-single digit revenue growth it had enjoyed until a few years earlier (Exhibit 6). In addition, the management of Thomson Reuters believed that changes in the journal business and the rise of OA would add to uncertainty over the future business model, potentially putting pressure on valuations. At the same time, the business’ high profitability meant that a sale would generate substantial amounts of cash.

Science and IP accounted for only 8% of Thomson Reuters revenues… 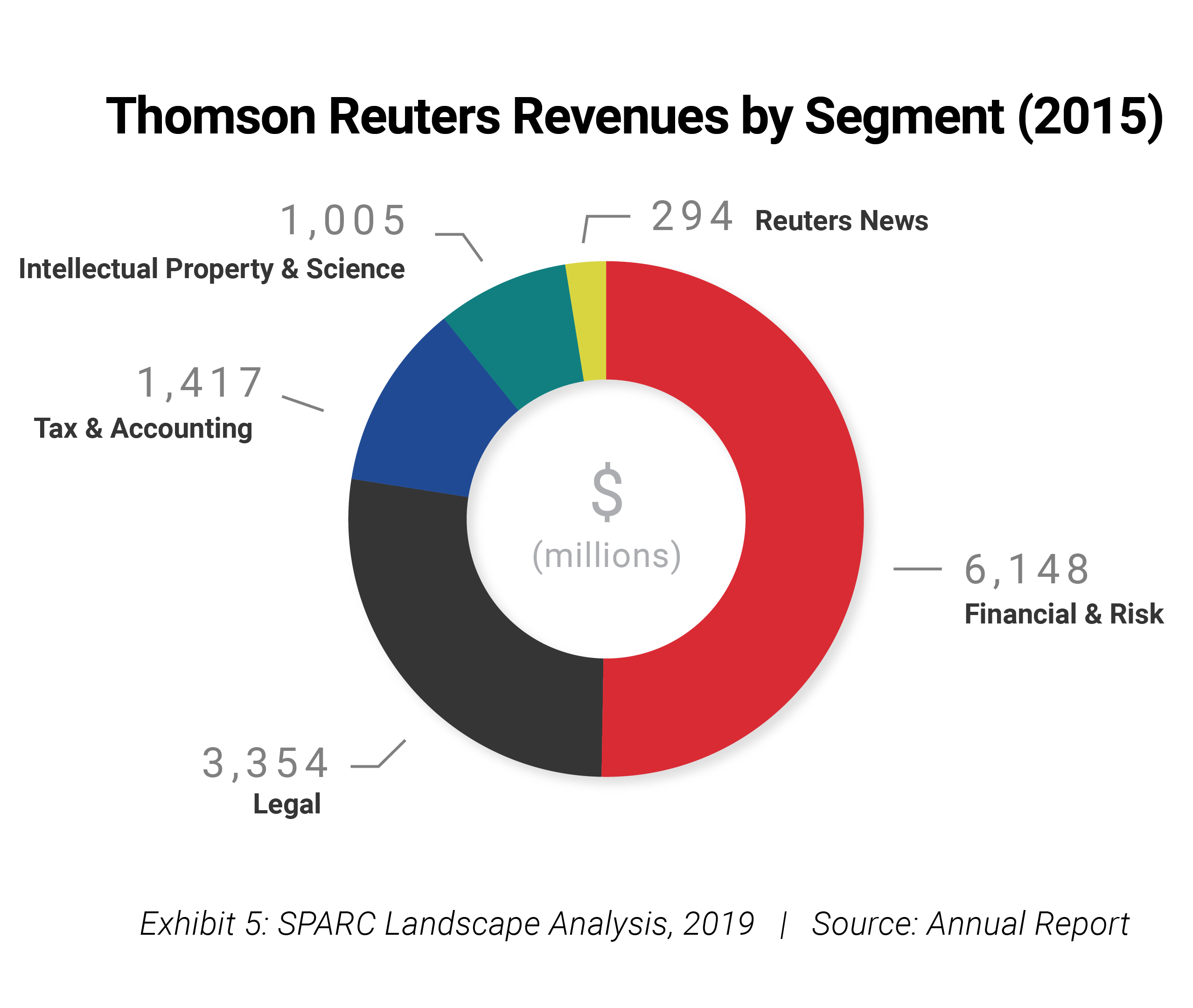 …and, by 2016, its growth had slowed down considerably.

The sale price ($3.55 billion) implied a valuation of about 11.5x 2017 EBITDA ($310 million). At the time of the sale, the latest reported full year EBITDA (for the Fiscal Year 2015) was $313 million (and in 2016, when the assets were mostly owned by Thomson Reuters, the EBITDA was $315 million). At the end of 2018, the company carried a substantial amount of net debt ($2.007 million, slightly higher than the $1.965 million it reported at the end of 2016), implying a net debt/EBITDA of 6.5x (6.2x at the end of 2016), higher than the 5.5x of Springer Nature. This means that management operated under significant constraints in terms of investments. However, in January 2019 Clarivate announced that the company would merge with Churchill Capital Corp, becoming a public company listed at the NY Stock Exchange. The company guided that the transaction implied an entity value of $4.2 billion, with valuation of 12.5x 2019’s estimated EBITDA (implying a 2019 EBITDA of about $335 million). Clarivate also disclosed that its net debt had declined to $1.3 billion thanks to the closing in Q4 2018 of the sale of its Intellectual Property Management business (in part offset by the acquisition of TrademarkVision). This means that the Net Debt/ EBITDA ratio of Clarivate has declined to about 3.9x – a ratio which is still high, but is more manageable and provides management with some room to invest going forward.

What is Clarivate’s strategy?

When Thomson Reuters owned the science business, it kept it separate for many years from its other assets in the space (healthcare and IP), pursuing a strategy narrowly aimed at serving libraries and academic institutions with leading tools which would be neutral in the eyes of its customers and the scholarly communications industry. After the disposal of most of the healthcare assets in 2012, it became apparent that there was an opportunity to consolidate science and intellectual property in one group, with the view of offering, over time, products which bridged data on basic research with data on commercial applications.

Get new and sensitive analysis in your inbox.

Get the latest analyses, and ones too sensitive to post, sent to you and your team’s inbox by joining SPARC.

It is unclear to what extent the new owners of the business support this strategy. Despite the high level of debt, the company has made two acquisitions aimed at modernizing its research offerings: Kopernio, which is integrated into Web of Science, and Publons, which fits with ScholarOne, the manuscript management system. However, neither of these upend the company’s strategy as a neutral data analytics supplier to researchers and librarians. For many smaller publishers that are unable to compete with the investment budget of Elsevier, Clarivate offers the ideal partner to enhance their services.

Integration within Clarivate between scientific and academic research and the other areas of activity is less prominent. In fact, the few interviews given by Annette Thomas, the CEO of the Scientific and Academic Research Group, are focused on the core business. Nonetheless, we think that integration between core data analytics and intellectual property remains a significant opportunity, as it can lead to serving both universities when seeking deeper ties (and funding) with industry, and industry when looking at identifying, understanding, and supporting relevant research in its early stages.