Elsevier is the name usually attributed to RELX Group’s Scientific, Technical, and Medical business. RELX Group (known until 2015 as Reed Elsevier) is a London-based provider of information, data, and analytical services for corporate, professional, and academic customers. Elsevier is RELX’s largest area of activity, accounting for 33.7% of its revenues but 40.5% of its profits. It is also the most profitable business within RELX’s portfolio, although Risk & Business Analytics is a close second.

How well does Elsevier compete in journal publishing?

Elsevier is not the largest publisher of STM journals in terms of titles (Springer Nature Group publishes about 3,000 titles), but it has the largest journal revenues: Springer Nature Group had 2017 revenues of €1.64/$1.9 (at an exchange rate of 1.16) billion, but about 30% of that was books, leaving journal revenues at about $1.333 million, well below Elsevier’s estimated $1.8 million.

There is no undisputed source for market shares in the journal business. STM estimates that the journal market is worth about $10 billion. Assuming that 55% of Elsevier’s 2017 revenues came from journals, that translates into £1.363 billion which - at the average exchange rate for the year – equals $1.756 billion (a 17.5% market share). This number appears directionally correct, as the approximately 2,500 Elsevier journals account for about 9% of all journals published, and revenues per articles at Elsevier should be much higher than for the average of the industry1.

Elsevier, however, attracts a disproportionate amount of attention within the academic community because of its profitability and its business practices. Elsevier operates at a 37% reported operating profit margin compared to Springer Nature which operates at a 23% margin. Elsevier has often pursued tone-deaf business practices, which have been viewed as a land grab by the academic community. For example, Elsevier has refused in many countries to sign offsetting deals for publishing Open Access articles in subscription journals and has also engaged in relentless lobbying activity in both the U.S. and Europe to extend copyright in novel directions. Elsevier now routinely bypasses librarians and attempts to strike deals with other offices within large academic institutions. In response to the concerns of its critics, Elsevier would argue that it enjoys record revenues and profitability for the following reasons: it manages itself well, researchers want to be published in their journals, it funds activities for Open Science and for integrity in research more than any other publisher, and it sells data analytics services because the academic and research communities need them.

Both sides of this argument miss an essential point. The adversarial relationship between Elsevier and academic librarians (and some researchers) is an anachronism and a throwback to management practices that have long disappeared in virtually every other industry. The existence of SPARC, the periodic Elsevier boycotts from some groups of academics, and the announcements from European consortia (and, more recently, from the University of California) willing to lose access to Elsevier journals rather than agree to requested price increases all point to a flaw in how Elsevier (and some competitors) are run.

Historically, Elsevier has pursued price increases in the region of 5% annually, and justified this request with the parallel 5% growth in articles it publishes. This argument is flawed for two reasons: it assumes that there are neither productivity gains nor scale economies anywhere in the business. The first part of the argument is surprising – if productivity at Elsevier does not rise, then management is not doing its job properly – and the second part of the argument is wrong – administration or IT staff does not rise just because more articles are published. In light of the financial pressure on academic library budgets, refusing to pass along some of the savings is strictly a commercial and business decision, but it does invite retaliation from customers when possible. We have seen that Elsevier is effectively reinvesting some of these gains in new products and services which offer no benefit to libraries, as they are targeted to other users within universities (and even to completely different customers). In other words, librarians are asked to bear the financial burden of investments which will benefit some other category of customers, as well as the shareholders and management of Elsevier.

Another issue with the request for an annual increase based on a larger number of articles published is the quality of those additional articles. Just because it is additional research does not make it equal in quality. In general, a large amount of published research may end up of limited or no use to subscribers. Data released by ten UK universities on readership in chemistry and life sciences journals show that 50% of journals account for 5 to 10% of all article readership (Exhibits 1 and 2). This pattern applies to Elsevier journals as well: when New Mexico State University decided in 2010 not to renew one of its collection contracts with Elsevier, it published the data relating access to readership for the journals included in the collection (Exhibit 3). In the absence of obligations for leading journals to add articles at a pace that is at least in line with the overall growth rate of articles published, there is a significant risk that the average “quality” of the articles will decline. This, in turn, is a contentious issue for librarians asked to fund a growing number of journals and articles with no guarantee that their quality will be adequate. 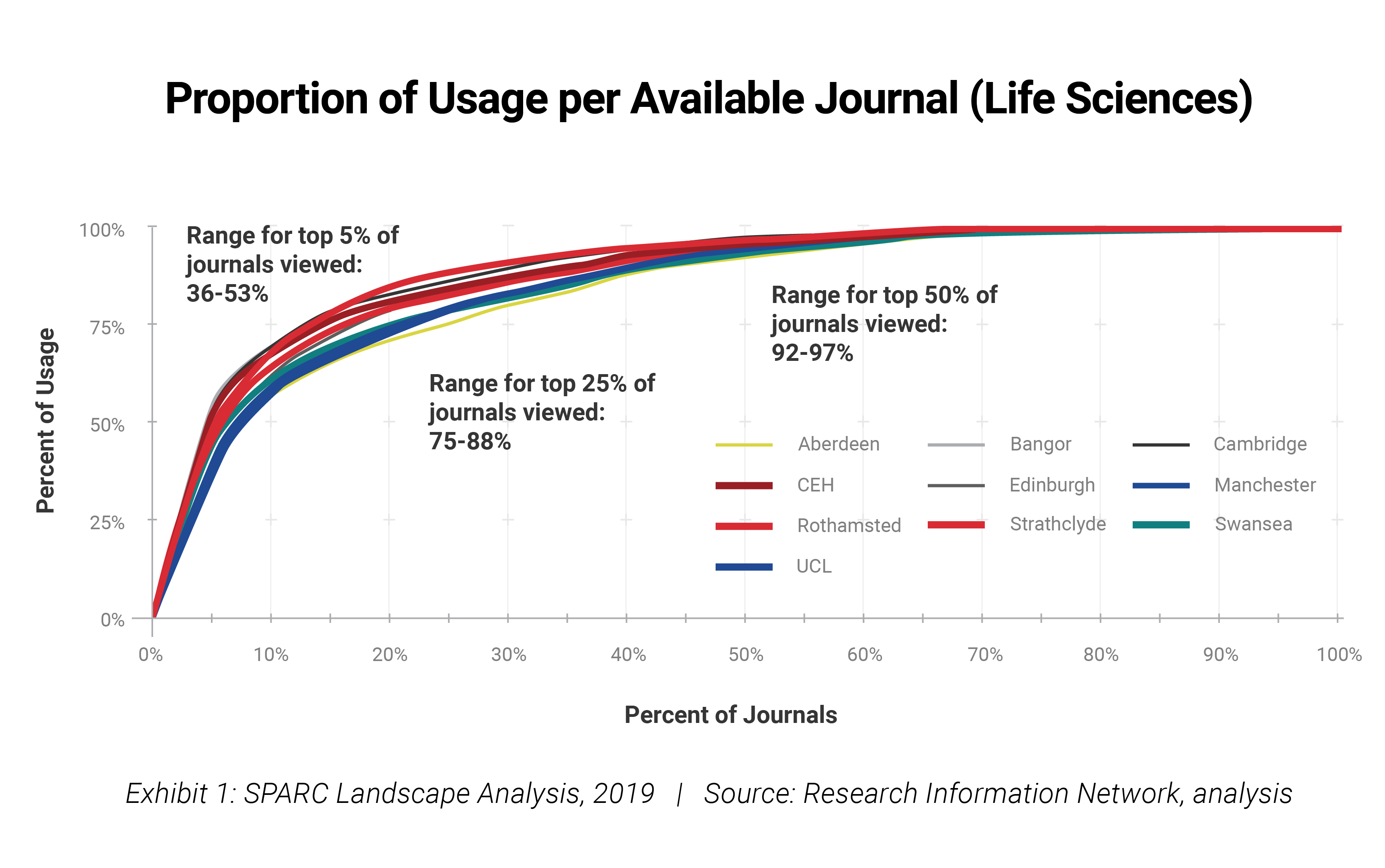 …and a similar ratio applies to chemistry journals. 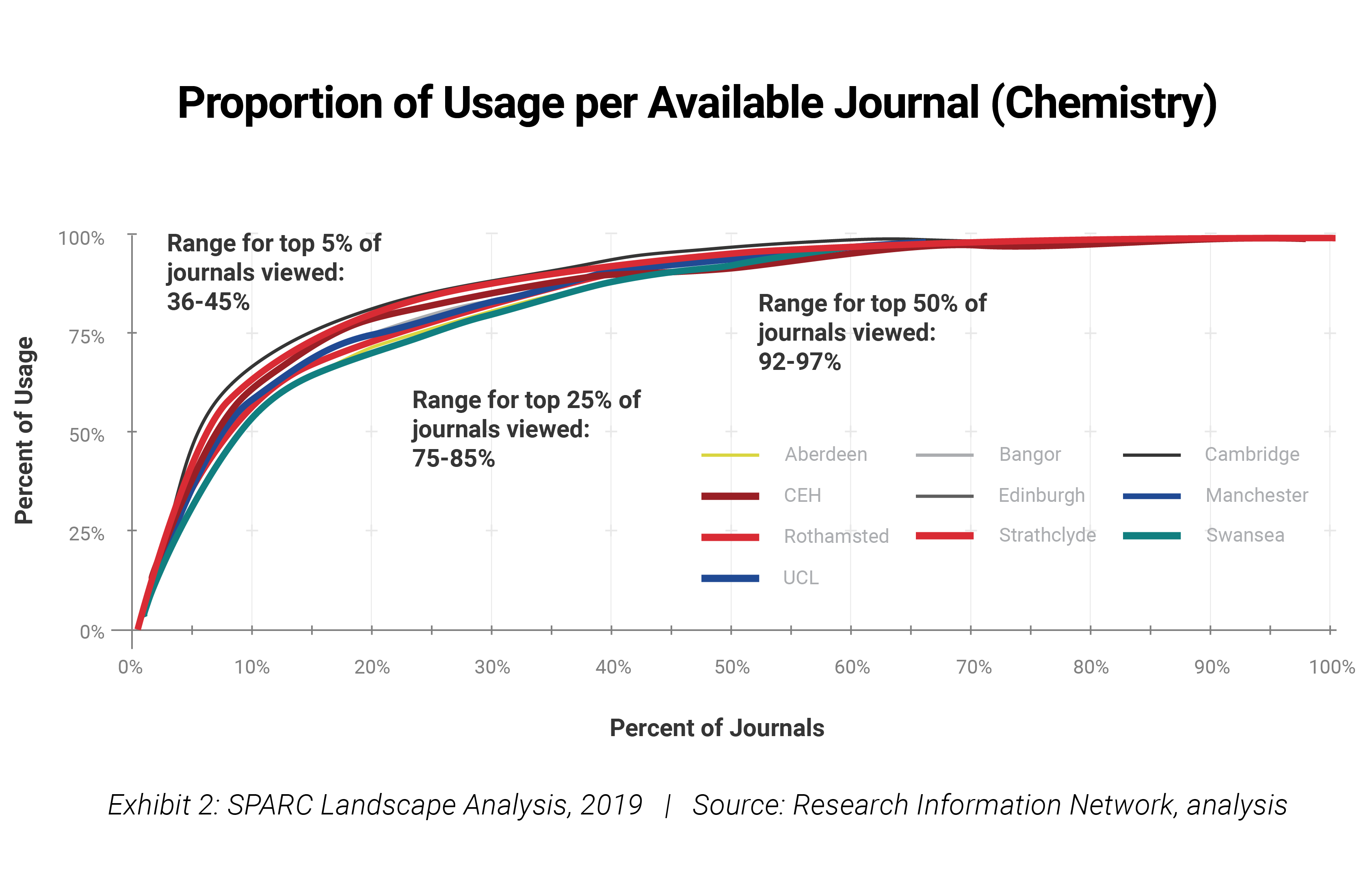 The same distribution applies to Elsevier journals, as NMSU reported that 901 journals (out of 1333) were accessed once a month or less in the nine months before contract expiration. 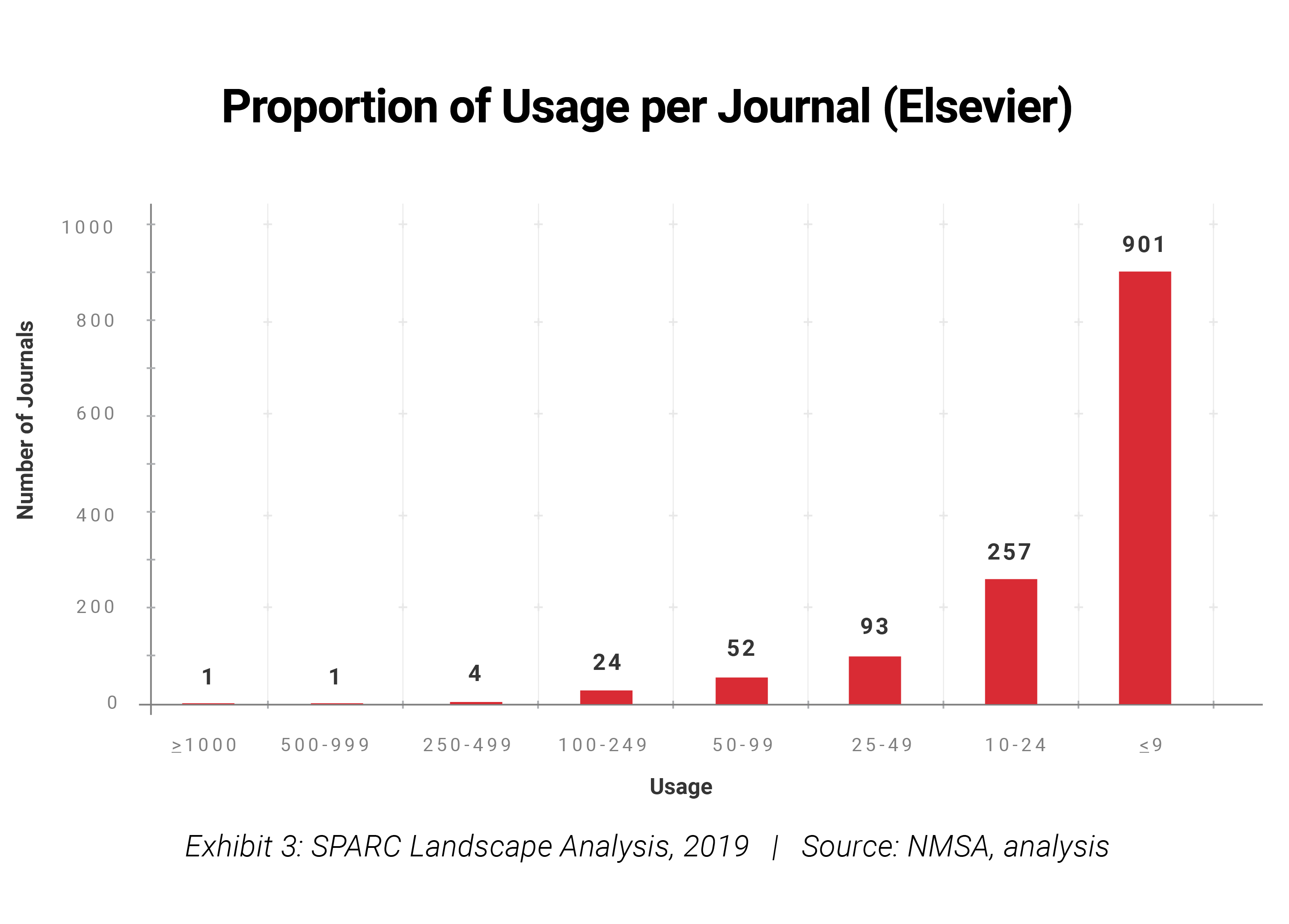 Elsevier and the future of scholarly publishing - what strategy?

With this background in mind, it is no surprise that Elsevier is thinking about what the future may have in store. In spite of the fact that scale economies in the business would favor acquiring other publishers, in the past few years, Elsevier has not pursued significant acquisitions in academic journals. The company has invested, instead, to acquire platforms and tools which would broaden its range of products and allow the company to attract new customers beyond its traditional base of research libraries. In fact, in a 2015 investor presentation, Elsevier explicitly indicated its intent to increasingly serve university administrations, funding bodies, and governments with tools aimed at estimating and improving the productivity of research and optimizing funding decisions.

These investments have not been huge, but have been much larger than would make financial sense. Press reports indicate that Mendeley and SSRN cost between £100 and 125 million ($130 and 165 million) and Bepress may have cost between $100 million and $130 million. Mendeley and SSRN have business models which are unlikely to ever become truly profitable as standalone entities, while Bepress was profitable at the time of the acquisition (but the price paid still looks very expensive).

What is Elsevier’s strategy?

Elsevier’s answer to this question has probably evolved over time. As we previously mentioned, it is not unusual for a company to enter a business or acquire assets with one strategy in mind and then broaden its scope as it learns more about the opportunities offered by the acquired business and as the industry landscape evolves. Several interviews have surfaced four themes which we believe are central to the future of Elsevier.

Get new and sensitive analysis in your inbox.

Get the latest analyses, and ones too sensitive to post, sent to you and your team’s inbox by joining SPARC.

What could derail Elsevier?

We see three major threats to Elsevier’s performance going forward and have laid them out below in what we estimate to be declining order of likelihood.